“Sheltered by a horseshoe of snow-capped mountains and ice-cut fjords the tiny village of Tasiilaq defines isolation. In previous years, travel routes to this remote region have been limited, making Tasiilaq feel cut off from the rest of the world. But with more flights and travel packages added yearly this area is now more accessible than ever”

Most tourists don’t immediately think of Greenland as their next travel destination but Greenland promises the adventure of a lifetime. Tasiilaq Greenland is an icy wonderland inhabited by teams of sled dogs, colossal glaciers, and home to the world’s second largest ice sheet. Despite its remote location, Tasiilaq is considered one of the most scenic and populated towns in Greenland. Just 62 miles south of the Arctic Circle, this traditional hunting and fishing village is characterized by it’s brightly colored Monopoly-style houses.

Visitors will enjoy a stay at Hotel Angmassalik, one of the three hotel options in town. This arctic style inn sits on a craggy rock at the highest point of the village. Both the rooms and the restaurant boast a stunning panoramic view of the town and marina. The restaurant specializes in traditional Greenlandic fare, making this a popular dining destination for both tourists and locals. The hotel provides shuttle service, tour arrangements, full service bar and satellite.

Tour the Ammassalik museum to see how villagers lived in the not so distant past. Located in the town’s historic church, the museum houses a variety of authentic hunting and fishing relics. Learn about the traditional Inuit way of life and view a replica of a real turf house.

Visit the Stunk workshop where Inuit artisans demonstrate and sell their craft. The workshop is the best place to find handcrafted Tupilaks; Traditional carved statues made from antler or bone. Bargaining over prices is frowned upon as expert skill is required to produce these intricately carved masks and statues. Souvenirs made of antler or bone are fine to bring home, but most countries will not allow items made of fur or sea mammals to be taken through customs.

Dog sledding is the preferred mode of transport in Greenland during the colder months. It not unusual to see large white wooden sleds scattered randomly throughout town. The husky dog population actually outnumbers that of people in some areas of Greenland. Although cute and furry, the Greenlandic Huskies are tough working dogs. Their heavy coat and enduring temperament helps them survive life outside during the harsh winter months when there are up to 24 hours of darkness and the temperatures plummet.

A number of dog sledding tours and excursions draw visitors outside the confines of the village. One exciting mushing adventure is a day trip is to visit Ikateq; an outlying settlement West of Tasiilaq. Another option is to become certified as a licensed dog musher. During a two day instructional tour, students will learn the basics of dog sledding and get certified to drive their very own team of six to eight huskies. Tours arrangements can be made through Destination East Greenland.

Nature lovers can set out on a variety of remote wilderness hikes. Experience the pure solitude and stillness that characterizes Greenland on a hike to the Valley of the Flowers. This single track trail is easily accessible from the far end of the village past the town’s cemetery. Following a pristine river, the trail meanders through a number of small hills and valleys. Tiny pink and purple arctic flowers dot the landscape. At the trails end, hikers are rewarded with a sweeping panoramic view of the surrounding snow-capped mountains shrouded in an icy curtain of fog.  Visiting the viilage during the summer solstice when the sun remains bright nearly around the clock will allow more time for a hike in the midnight sun.

One concern in arctic climates is the possibility of encountering a polar bear. Although Tasiilaq is inhabited by a large polar bear population, chances are unlikely that you will see one. During the summer months the bears tend to follow the drifting ice and coastlines. Hikers are more likely to see the white arctic foxes that frequently roam the countryside foraging for food.

Valley of the Flowers Hike; Midnight

Greenland’s melting ice sheet has been making global warming news as measurements show it’s melting rapidly. Greenland has the second largest ice cap in the world, covering about 80% of its land mass, making it particularly vulnerable to the effects of global warming. Studies report losses up to 47 cubic miles of ice per year, with significant losses in the southeastern region. Putting the tiny village of Angmassalik in the center of thye global warming controversy. 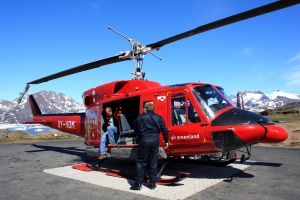 Helicopter Ride Back to Kulusuk

The highlight of any trip to Greenland is a cruise or helicopter ride to view the magnificent glaciers or the ice cap.

One option is to take an iceberg cruise, which weaves through a surreal maze of massive floating icebergs, while a Minke or Humpback whale sometimes surfaces and spouts. Another option is a full day cruise to view the ice filled Sermilik fjord with a stop over at Ikateq village. Most tours provide the shelter of a heated cabin and the comfort of a hot chocolate, as the arctic winds out on the open waters can get a bit rough.

A good time to visit is during the warmer months of March through September. The highlight of the summer solstice is in mid-June with almost around the clock sunshine and moderate temperatures up to 60 F. Keep in mind, routes to this village are limited, one must fly via helicopter from Kulusuk airport, for this reason purchasing a tour package is highly recommended.

The easiest option is to use a travel agent; Nordic visitor offers the most affordable and organized travel packages to Tasillaq from; listed as Ammassalik. A tour package from Reykjavik includes all flights, helicopter transport and accommodations at Hotel Angmassalik. Air Iceland offers stand alone daily flights from Reykjavik airport to Kulusuk during the summer months. From there arrangements must be made through Air Greenland for the helicopter ride to the village. There are not many other options as roads do not connect the town to other cities and a ship would take too long.

Tasiilaq is an unspoiled artic refuge filled with colossal icebergs, towering ice-cut fjords, and the unique culture of the Inuit. A trip to this remote village is an unforgettable adventure of a lifetime.