Iceland is a land of extremes filled with hot geothermal springs, ice cut fjords and sub-glacial volcanoes.  What better way to tour Iceland’s natural beauty than by dog sled? 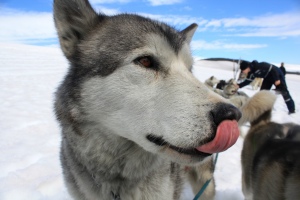 “Waiting at the top of the Mýrdallsjökull glacier was a team of ten anxiously waiting sled dogs. These tough but adorable dogs are purebred Greenlandic Huskies, Yann our dog musher told us.  Despite their tough exteriors these dogs are friendly and playful.  After playing with the dogs for awhile, we climbed onto the long white wooden sled.  Markus the second musher, warned us to sit as far back as possible and leave enough space in the front for them to stop the sled in case of emergency. Though I was not quite sure what that meant, I did as instructed. 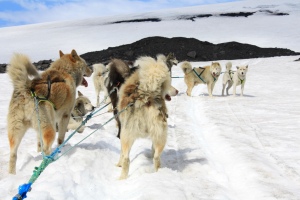 My dreams of an energetic start failed to materialize. The dogs were off to a slow start. The lead dogs would trot a little then stop and look back at the mushers, as if to ask, ”What should we do?”

Markus ran up ahead to lead the dogs so they wouldn’t keep stopping and playing with each other.  Yann and Markus skijored (skied) alongside the sled calling out commands to the dogs. “Hike!” they shouted, to get them to run, “Haw!” they yelled to turn left, and “Gee!” to turn right. 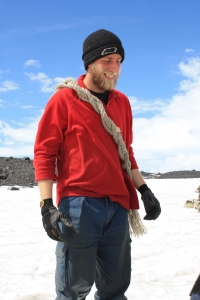 I was enjoying the ride as the dogs were trotting along now at a leisurely pace. Skijoring effortlessly alongside, the mushers were successfully controlling the team. All of the sudden the dogs took off and ran out of control at full speed.  I was surprised at this sudden change in speed. Yann yelled “Whoa! Whoa!” repeatedly, but they didn’t stop.  I was laughing hard but also was kind of scared that they would run off the side of the glacier!   All of the sudden Yann let go of the rope to avoid skiing wildly into our sled.”

One thought on “Get Ready for a Wild Ride…Icelandic Style”