Salem is the ultimate destination for Halloween enthusiasts and party-goers. The city comes alive with a month long celebration culminating in a massive party in the streets on the 31st!

The best way to start your visit to Salem is with a glimpse into its tragic past with a visit to the Salem Witch Museum. Dramatic life-size displays re-enact the tragic and haunting events of the witch hysteria of 1692.

“In January of 1692, the daughter and niece of Reverend Samuel Parris of Salem Village became ill. When they failed to improve, the village doctor, William Griggs, was called in. His diagnosis of bewitchment put into motion the forces that would ultimately result in the death by hanging of nineteen men and women. In addition, one man was crushed to death; seven others died in prison, and the lives of many were irrevocably changed.” Although it sounds morbid the museum presents an interesting and educational view of Salem’s disturbing past. 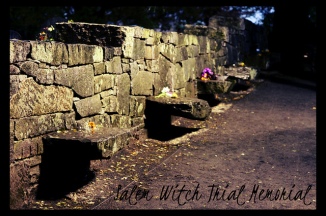 Afterwards pay your respects to the poor souls honored at the Salem Witch Trial Memorial located near the Old Burying Point cemetery; dedicated to the women and men accused, tried and executed for being witches in Salem in 1692. The Memorial consists of 20 granite benches lined along a stone wall on the other side of the old cemetery. The benches are inscribed with the name of the accused and the means and date of their execution. With the exception of Giles Corey, who was pressed to death by rocks, the following were hanged: Bridget Bishop, George Burroughs, Martha Carrier, Martha Corey, Mary Easty, Sarah Good, Elizabeth Howe, George Jacobs, Sr., Susannah Martin, Rebecca Nurse, Alice Parker, Mary Parker, John Proctor, Ann Pudeator, Wilmott Redd, Margaret Scott, Samuel Wardwell, Sarah Wildes and John Willard. A good reminder of why religious tolerance is important in not only Salem but everywhere.  The cemetery next to the memorial is worth a quick look  as it is one of the oldest in Salem. 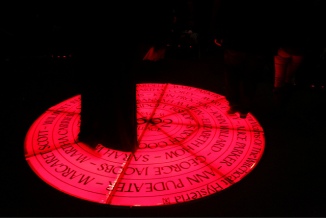 Now that you have been fully educated on Salem’s witchcraft history-it’s time for some fun! I love shopping for Halloween goodies at the Salem Open Market located in Derby Square and Essex Street. The open market is lined with vendors selling witchcraft memorabilia, sweatshirts, t-shirts, jewelry and much more. The market is a good place to pick up a fun costume or a mask to wear at night. There are also many shops lining the streets and market as well. Need a voodoo doll or a candle for a love spell? Head over to Hex; an old world witchcraft shop located on Essex street, filled with items that will appeal to the average shopper and to the serious magical practitioner. 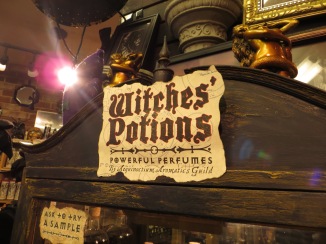 A  ghost or haunted history tour  is highlight of any visit regardless of the season. This is a fun way to learn about the history of Salem while visiting its supposed haunted hot spots. Even if you don’t believe in ghosts the tour offers many  entertaining tales about local history and lore. One of the more tragic tales is the account of poor Giles Corey, accused of witchcraft and pressed to death by boulders. According to the legend; where his ghost walks tragedy follows close behind.

At night the city comes alive with costumed party-goers and trick-or-treaters spilling out into the streets of Salem to enjoy the festivities. Its quite a site to see so many elaborate costumes, everything from creepy babies to ghost busters to vampires.  After a long day of shopping and tours, you might need a drink! Don’t miss the Shock Top Beer Garden, where you can enjoy seasonal beers and live music. Once that’s over around 10:30 the entire city stops to watch the highlight of the night-the Halloween fireworks over the North River. Unfortunately this signifies that the end of the Halloween fun and festivities is drawing to an end in Salem; but don’t worry there’s always next year! 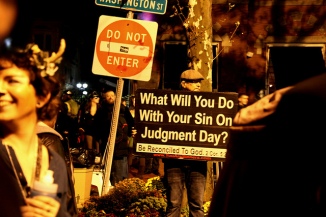 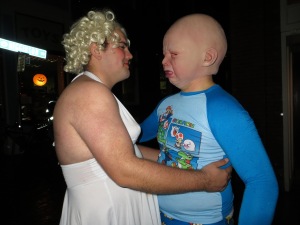 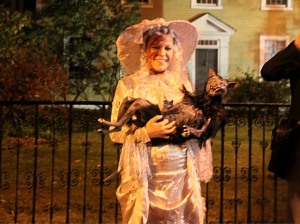